By the time doctoral student Ghila Amati interviewed for Shalem College’s first cohort of the Arthur Fried Fellowship, she explains, she had studied at numerous institutions, from a high school for the humanities in her native Italy to a university in Israel as a new immigrant, and most recently, at Oxford University. Yet her conversation with Shalem Dean of the Faculty Prof. Leon Kass, she recalls, “was the first time I heard a teacher speak about how much he himself learned from his students, and how the experience of teaching enriched and even changed his own point of view.”

That, says Amati, was the moment she knew that the college’s inaugural fellowship program was exactly what she wanted to do.

Named in honor of the late philanthropist, former chairman of the AVI CHAI Foundation, and devoted supporter of Shalem Arthur Fried, and seeded by a generous investment by an anonymous donor, the pilot program will bring four outstanding young doctoral students to Shalem this fall in an effort to expose tomorrow’s leading Israeli scholars to the college’s singular approach to pedagogy. To that end, the program will feature participation in a weekly, great-books style seminar on Plato’s Meno, a dialogue on teaching and learning, led by Kass himself; attendance in Core Curriculum courses taught by Shalem master teachers; and opportunities for fellows to practice their craft in seminars with students and faculty. Fellows will do all this while finishing their dissertations—a time, Kass is quick to point out, when most academics are hardly looking to take on paradigm-shifting challenges.

“One of the goals of this fellowship is to prepare ambassadors for Shalem’s unique educational model. We therefore looked for not only outstanding scholars, but also individuals who truly seek to give thought to the act of teaching,” explains Kass, who developed the program together with Shalem President Russ Roberts. “We also looked for scholars who believe in the importance of direct inquiry, or the unmediated encounter with the text. This approach isn’t common in Israeli academia, so their interest in spending a year studying this style of teaching speaks volumes about their commitment to serious education.” 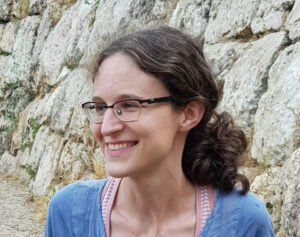 For Tel Aviv University scholar and fellow Daphne Baratz, whose dissertation explores the influence of Josephus’ Torah commentary on the development of legends and myths, the opportunity to gain teaching experience under supervision and with feedback from extraordinary teachers was one she simply couldn’t pass up.

“I’m deeply grateful for this opportunity,” Baratz says. “I believe strongly that allowing the text itself to direct one’s study and the classroom discussion is the right way to teach the humanities. I look forward to seeing how this concept shapes the learning at Shalem.”

To be sure, it helps that Baratz knows firsthand how critical a part of intellectual development is moving outside one’s comfort zone. Having grown up in a secular family in the mixed, Jewish-Arab city of Yaffo, Baratz decided to study ancient Greek—the second of six languages in which she’s now competent—after her first encounter with Plato. When she later decided to fill in the gaps in her knowledge of Jewish texts, she chose to spend several years studying Talmud at the Matan Women’s Institute for Torah Studies, an academically rigorous women’s seminary in Jerusalem.

“The common themes in the backgrounds of the Arthur Fried Fellows are broad interests and fearless inquiry, and a determination to engage with great texts and ideas on their own terms,” says Kass. By way of example, he points out that fellow Ahuvia Goren from Ben-Gurion University of the Negev, who studies skepticism among Italian Jews in the late 17th and 18th centuries, provides literal translations of rabbinic and scientific texts alongside cultural translations of concepts and genres in his doctoral dissertation. And the Hebrew University scholar of philosophy Noam Cohen, the fourth Arthur Fried fellow, recently decided to read Dante with a friend in the original Italian—this, despite the fact that his field of research is 20th century phenomenology. Cohen will also teach a section of the Core Curriculum’s introductory course for freshmen on Greek philosophy.

Finally, Kass adds that “all four fellows are also interested in bringing the Jewish and Western traditions into conversation. They do this in their own research, each in his or her own way, and we’re excited for our students to see the fruitful possibilities inherent in this approach.” That, and the models of curiosity, commitment to one’s nation and people, and contribution to scholarship they provide.

“One cannot come away from a discussion with the Arthur Fried Fellows without thinking, ‘what incredible individuals, and what an incredible country has given rise to them.’ I am sure,” Kass concludes, “that we will all benefit tremendously from their company.