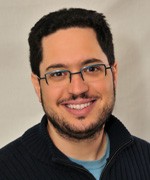 Tzahi Weiss is a senior faculty member at the Open University and researcher in the field of Jewish mysticism and modern Jewish literature. Author, most recently, of Death of the Shekhinah in S.Y. Agnon’s Oeuvre: A Reading in Four Stories and their Sources (Bar-Ilan, 2009) [Hebrew], Dr. Weiss received his Ph.D. from the Hebrew University in Jerusalem, and was Rothschild Postdoctoral Fellow in the Divinity School at the University of Chicago. Dr. Weiss has served as lecturer in the Revivim Honors Program for the Teaching of Jewish Studies Teachers, also at the Hebrew University, and in the Department for the Literature of the Jewish People at Bar-Ilan University.

Letters by which Heaven and Earth Were Created: The Origins and the Meaning of the Perceptions of Alphabetic Letters as Independent Units in Late Antiquity's Jewish Sources (Bialik Press, forthcoming). [Hebrew]

Death of the Shekhinah in S. Y. Agnon's Oeuvre: A Reading in Four Stories and Their Sources (Ramat Gan: Bar-Ilan University Press, 2009). [Hebrew]

“A Metamorphosis in the Perception of God in Bialik’s Poetry,” in: On Faith: Studies in the Concept of Faith and its History in the Jewish Tradition, M. Halbertal, D. Kurzweil and A. Sagi, eds. (Academic Studies Press, forthcoming).

"The Yearning for Eastern Europe in Modern Hebrew Literature," Michael's Book: Between This Time to Those Days – A Festschrift for Michael Bahat, Avi Sagi, ed. (Jerusalem: Keter, 2007), pp. 525-543. [Hebrew]

"Katerina and the Jew: A Few Notes about Appelfeld’s Katerina and Freud’s Katherina,"  Studies in Jewish Narrative 3, (forthcoming). [Hebrew]

“Soft and Hard: More Comments on the Syrian Context of Sefer Yetsirah,” Kabbalah: Journal for the Study of Jewish Mystical Texts, [Hebrew] (forthcoming).

"The Reception of Sefer Yetsirah and Jewish Mysticism in the Early Middle Ages," The Jewish Quarterly Review (forthcoming).

"'Things Which Are Better Concealed than Revealed': Some Historical Observations on S. Y. Agnon's Attitudes toward the Sabbatean Movement," The Association for Jewish Studies Review (forthcoming).

"On the Matter of Language: Creation of the World from Letters and Jacques Lacan's Perception of Letters as Real," The Journal of Jewish Thought and Philosophy 17 (2009), pp. 101-115.

"The Perception of the Letters in the Samaritan Memar Marqa and in its Equivalents in Rabbinic Sources and in the Book of Creation," Jewish Studies 43 (2007), pp. 89-129. [Hebrew]